The Planet Crafter Location of Map

Description – Your Escape Pod will land here at the beginning, and this is also where the majority of players establish their initial bases. Any bases you build here should be kept modest and compact because the region will flood once the ice melts.

Resources – Despite the approaching flood, the majority of individuals advise establishing a small mining site here. Cobalt, Ice, Iron, Magnesium, Silicon, and Titanium are all abundant in this region, which is extremely rich in minerals..

Description – It really only acts as a transit point between the Crashed Freighter and the Underground Cave Tunnel that leads to the Sulphur Fields because the region is primarily controlled by it.

Resources – Similar resources to those found in the Lakebed Starting Area are sparingly distributed across the area, with the Underground Cave System entrance being the location with the greatest concentration.

Description – Little more than a resourceless archway, the tunnel between the Iridium Mines and the Sulphur Fields is barred by impenetrable ice that must be melted by terraforming in order to be accessed. This specific tunnel is known as the “Iridium Gate” and is regarded as the main route to the Sulphur Fields for players stationed along the Shoreline after the path has opened up.
Unbreakable Ice blocking the tunnel from the Steep Hillside to the Sulphur Fields must be melted by terraforming in order to obtain access. At the halfway point, the second wall of ice exists, which must once again be broken by ever-greater Terraforming. This specific tunnel, known as the “Sulphur Gate,” is considered the main entrance to the Sulphur Fields for players located in the Lake after the passage has opened up.

Resources – (The Iridium Gate has no resources, as was already explained.) The Sulphur Gate, on the other hand, has a respectable amount of both Osmium and Sulphur. The Sulphur Gate stands out in particular since it is the only cave where you may obtain osmium prior to the start of the Terraforming process. This is because you may obtain roughly six pieces of osmium before encountering the halfway ice wall on the Sulphur Fields side of the tunnel, which is unobstructed by enormous ice formations.

Description – More of a border than a biome. The Shoreline indicates where it is safe to develop without worrying about your base flooding. It also indicates how high the water levels climb.

Description – Usually, here is where everyone establishes their primary foundation. Large and level, it is ideal for practically any foundation design. With travel times to every biome from here of around a minute or less, this place is also the most central. The Crashed Cruiser, a relatively unimpressive residual wreck with six blue boxes and no terraforming machinery to demolish, also makes its home here.

Resources – Cobalt, Ice, Iron, Magnesium, Silicon, and Titanium are just a few of the abundant fundamental materials that can be found here and are needed for most constructions and terraforming tools. There are also plenty of other materials like Cobalt and Ice.

Description – Cracked Spires is a very tiny biome with three enormous shipping grates, only two of which are accessible. Although aesthetically spectacular, the treasure in these abandoned ships is, to put it mildly, disappointing. The Underground Cave System at Cracked Spires, instead, is the main draw.

Resources – A typical number of resources may be discovered at Cracked Spires, including the usual suspects Cobalt, Ice, Iron, Magnesium, Silicon, and Titanium.

Description – Despite the lack of creatures in the game, several players have described the area as being dark and gloomy and experiencing elevated BMP rates. Although it’s possible that’s because, as the name implies, Aluminium Hills is full of enormous, enormous pieces of highly sought-after metal, which isn’t mineable in this early iteration of the game.

Resources –Along with the usual Cobalt, Ice, Iron, Magnesium, Silicon, and Titanium, this biome also has lots of little bits of Aluminium that may be mined. However, huge chunks of Aluminium are not to be mined. It is important to note that the aluminum deposits discovered here have significantly deeper coloration and, from a distance, nearly seem like magnesium.

Description – The Iridium Mine is, as its name implies, awash with iridium. Iridium is spread out widely here, even built into the stone pillars and walls, in contrast to the cave in Cracked Spires where it is all clustered together. Each of the three layers in the cave has sloping sides towards the center that make it possible to move between them.

Resources – Along with the essential resources of cobalt, ice, iron, magnesium, silicon, and titanium, there is a huge amount of the highly sought-after metals iridium and aluminum.

Description – It’s impossible to view the materials on the ground because the region is completely shrouded in thick fog.

Resources – Here, Sulphur (referred to as sulfur in the game) predominates, and unlike in cave systems, Sulphur here will slowly replenish over time, exactly like minerals found in other biomes. Aluminum, Cobalt, Ice, Iron, Magnesium, Silicon, and Titanium are also present here.

Initially, there were quite a few names for this location, but before I drew my map, I asked our Discord community to vote on a specific name. There were A LOT of suggestions at first, but eventually “The Great Stormwall” was the most vaunted pick by quite the hefty margin. The majority decision has been disregarded by a few exceptionally snobbish players, so anticipate this area to periodically go by various names despite the general vote.

Description – The Great Stormwall, which completely encircles its northernmost border, is its most noticeable feature. The Underground Cave System, which is hidden behind this sandstorm wall and is around halfway through the course, contains both osmium and sulfur but is blocked by ice that must be thawed via Terraforming.

Resources – It may appear at first glance that the region is solely rich in cobalt, ice, iron, magnesium, silicon, and titanium. Super Alloy, on the other hand, may be found scattered along the length of the Stormwall, hidden by the Sandstorm Wall and spaced a few meters apart.

Description – It is advised that you carry a compass since the Labyrinth, a two-layer biome is a maze of narrow tunnels and multiple dead ends. Without one, it is quite simple to get lost here.

Description – The Canyon, a deep imprint that extends as far as the beginning of the lakebed, oddly enough doesn’t flood; instead, little puddles accumulate all over the place. In the northeastern area, there is little remaining wreck.

Resources – Along with the typical culprit’s Cobalt, Ice, Iron, Magnesium, Silicon, and Titanium, there are a few Blue Crates strewn throughout. 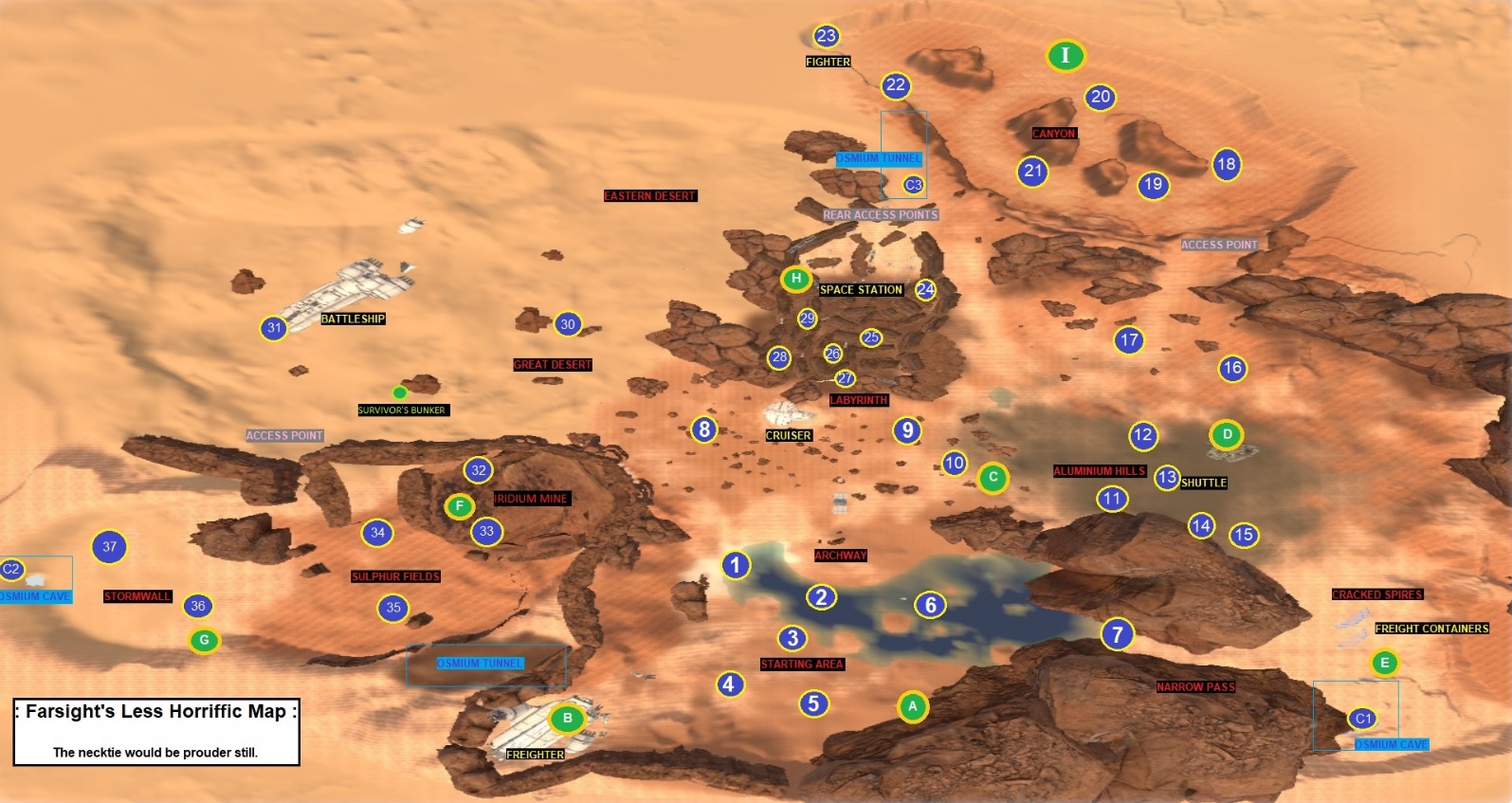 Everything in the game is secret, including every golden box, ruin, ship, and satellite. Once on the website where the map is stored in high quality, click the map once again to zoom in and view all the details.

About The Planet Crafter

Making a hazardous planet livable for humans is your only task when you are sent there. In order to heat the planet, produce an atmosphere with adequate oxygen, and eventually geo-engineer a full planet, you’ll need to live, gather resources, develop your base, and implement machinery.

To live, gather resources and minerals. Create all the equipment you’ll need to complete your quest. Investigate ancient wrecks and ruins to learn more about a mysterious planet.

To establish a base and be able to create life on this planet, you’ll need a variety of devices.

If what you’re looking for isn’t on this list, don’t worry. If you wish to stay informed, post a comment on the article. We’ll update the code as required.

The GamersExploit crew would welcome hearing from you if you have any suggestions or criticisms.